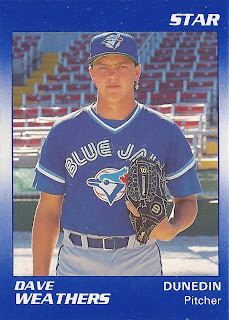 The New York Yankees prepared to punch their ticket to the 1996 World Series and helping them get there was middle reliever David Weathers.

Weathers arrived in the Bronx in a mid-season trade from the Marlins. He marveled at his fortune to the New York Daily News.

"To think that a few months ago I was in Florida on a last-place team and here I am a game away from the World Series," Weathers told the Daily News. "You really don't know how special that is."

Weathers picked up two relief wins for the Yankees that postseason and gave up a single earned run over 11 innings of work.

He continued on from that season, his sixth in the bigs, to a career that eventually spanned 19 big league campaigns and didn't end until 2009. He went 73-88, saved 75 games and posted a career 4.25 ERA.

Weathers' career began in 1988, taken by the Blue Jays in the third round of the draft out of Motlow State Community College in Tennessee.

Weathers started at short-season St. Catharines. He moved to single-A Myrtle Beach, then high-A Dunedin in 1990. He played 1991 at AA Knoxville, then made Toronto in August.

Marlins manager Rene Lachemann that September talked of trying Weathers as a starter, according to the Fort Lauderdale Sun-Sentinel.

''He didn't have real good command,'' Lachemann told the Sun-Sentinel. ''His breaking ball wasn't as sharp as it could have been. But now we'll give him a chance to start and see what he could do with that.''

Weathers started all of 1994 with the Marlins, but his future lay in relief. He appeared in 964 games over his career and started 69.

He played with the Yankees and Indians in 1997. He later credited that year with setting up the rest of his career.

"I went home and got in better shape, I started watching videos and taking the game more serious," Weathers told the New York Post in 2003. "I think a lot of young people, you get up in the big leagues, you get all the equipment you need, you lead the big-league life and you tend to forget what's important and that’s doing your job."

"I've had some weird double plays this year," Weathers told the St. Paul Pioneer-Press. "You take them how you can get them."