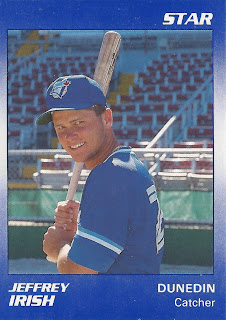 Jeff Irish played two sports at Michigan's Milford High School, baseball and basketball and he won accolades in both, according to his old school.

In basketball, he won All-League and All-Area honors his junior year, according to the school. He also won the top junior athlete award.

In baseball, he helped his team to the state finals. He also won personal honors, including being named top high school catcher by the Detroit Free Press.

With that resume, the Blue Jays came calling in the 1989 draft and Irish chose to continue on in baseball. Irish, though, couldn't continue that success into the pros. His professional career consisted of just two seasons.

Irish's professional career began with Toronto selecting Irish in the seventh round of the draft, out of Milford. Irish is also credited by his full name Jeffrey Irish.

For 1990, Irish played between short-season St. Catharines and single-A Dunedin. Between them, though, he only got into 26 games, hitting just .154. That season was also Irish's last in pro ball.