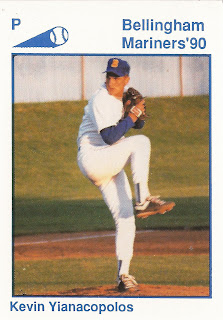 Kevin Yianacopolus start at Stoneham High School in Massachusetts and eventually made it briefly to the pros. In 2013, he returned to Stoneham as the school's head baseball coach.

After the appointment, Yianacopolus told the local Patch that his team would focus on the basics.

"Playing fundamentally sound baseball and teaching our players to compete at their highest ability is what will make us competitive," Yianacopolus told Patch.

Yianacopolus' highest ability took him from Stoneham to college and then the pros. His ability, however, only got him a single professional season. That ability then showed itself in other ways, as a longtime high school coach.

Yianacopolus' career began and ended in 1990, signed by the Mariners as an undrafted free agent out of the University of Maine. His name is also spelled Kevin Yianacopolos.

At Stoneham, Yianacopolus played baseball, football and basketball. He quarterbacked the football team and pitched for the baseball team. He struck out 19 in one senior-year game. He made the school Hall of Fame in 2012.

After heading to Bridgton Academy and Maine, Yianacopolus turned pro with the Mariners.

Assigned to short-season Bellingham, Yanacopolus got into 23 games in relief. He gave up a home run in a July game. Overall, he went 2-5, with a 4.46 ERA. Those stats marked the extent of his pro career.

He took over at Stoneham from longtime coach Bill Seabury.