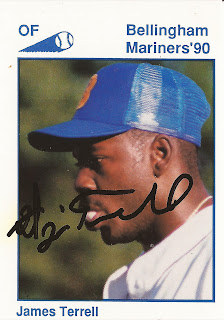 The topic: Playing in the minor leagues.

"He played and taught me almost everything about what is going on right now," the younger Terrell told Scout, "so it's pretty fun. It is just exactly what I thought it was going to be like."

The older James Terrell's career began in 1989, taken by the Mariners in the 58th round out of Hogan High School in California.

At Hogan, Terrell won all-league honors twice. He also earned the nickname "Hawk," according to his team card.

Terrell started with the Mariners in the rookie Arizona League. He hit .247 in 42 games. He then moved to short-season Bellingham for 1990. By mid-July, Terrell carried a .350 average. He cooled off by the end of the year with a total .223 average.