Scott Ebert, Too Fierce - U3 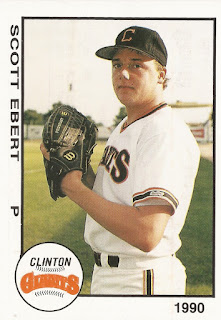 Scott Ebert's high school coach called Ebert a fierce competitor, about as fierce as he'd ever coached, according to The Oklahoman of Oklahoma City.

"Sometimes," Edmond coach Wendell Simmons told The Oklahoman in April 1988, "he's too fierce. He's so intense that it gets him in trouble. When he sees 20 or 30 scouts in the stands he wants to show them he's the best so sometimes he overthrows. But he's a gamer."

Whatever Ebert did in front of those scouts, it was enough for him to become a second rounder. Ebert, though, never could do enough to fulfill that promise. He played just four seasons as a pro, never making it above high-A.

Going into the draft, though, whether Ebert would sign or go to college was an open question, according to The Oklahoman. He had already committed to the University of Texas. Ebert, though, signed, his eye on the majors, and a payday, as a pro.

"I really liked Texas,," Ebert told The Oklahoman after signing, "but they don't pay the kind of money the Giants do."

With the Giants, Ebert started at rookie Pocatello, going 1-4 in 12 starts, posting a 4.75 ERA. He was wild in one July start, walking six and throwing two wild pitches.

Ebert moved to short-season Everett for 1989, going 4-9 in 14 starts, then returned there for 1990. In between, Ebert told The Oklahoman about his problems to that point, his control and injuries.

"I'm having enough problems getting my fastball over, "Ebert told The Oklahoman that April. "I've struggled some because of a sore shoulder. I really haven't been 100 percent since I signed, but I'm close this spring."