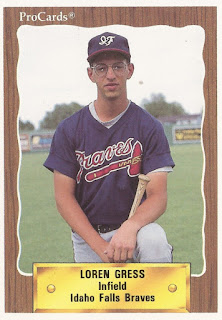 The Idaho Falls Braves didn't do much this day in August 1990, at least not compared to the rival Salt Lake Trappers. Loren Gress, though, helped make a little bit of noise, according to The Deseret News.

Gress helped get Idaho Falls on the board in the 14-4 loss with a fifth-inning single, The News wrote. He came around to score when the next batter homered.

Gress finished out that year for Idaho Falls, his first season as a pro. He returned for 1991, but didn't return for another. He made it as high as single-A in his two pro seasons, but didn't make it higher.

Gress' career began that year in 1990, signed by the Braves out of Hutchinson Community College in Kansas. He played his high school ball at Millard South in Omaha.

Gress started with the Braves at rookie Idaho Falls. He got into 53 games, playing mostly at first. He hit .330, with four home runs and 33 RBI.

Playing at Idaho Falls, Gress saw one appearance on the mound - late in a 28-0 August loss to Helena. He went 1.1 innings and gave up no runs.

Gress has since returned to his native Omaha, where he appears to be coaching and running marathons. He's listed as a varsity assistant coach at Skutt Catholic High School there. A doctor friend also referenced Gress' marathon running in 2010.
1990 Minor League Tally
Players/Coaches Featured: 2,465
Made the Majors: 997-40.5%
Never Made Majors:1,468-59.5%-X
5+ Seasons in the Majors: 416
10+ Seasons in the Minors:252
Posted by Steve78 at 3:56 PM