Jeff Hoffman earned his way to AA, then, on a road trip to Binghamton in 1992, he passed away - 3 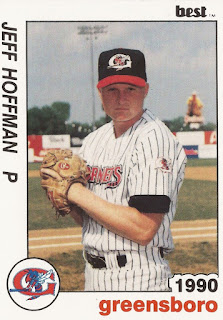 The Albany-Colonie Yankees scored early in this Aug. 30, 1992 game, but the game entered extras tied at three.

It was a game that the AA Yankees needed, not so much for their playoff run, but to honor their teammate, Jeff Hoffman. Hoffman passed away just over 24 hours earlier, claimed by an undiagnosed heart ailment.

After a five-year career in the minors, Hoffman earned his way to AA Albany for 1992, serving a dual role as a starter and a reliever that year.

But he never had the chance to make the majors. On a road trip to Binghamton, Hoffman was found dead in his hotel room Aug. 29. Tests later revealed he passed away of an irregular heartbeat, brought on by a heart problem.

Hoffman's career began in 1988, taken by the Yankees in the 14th round of the draft out of Vanderbilt. With the Yankees, Hoffman started at short-season Oneonta, giving up five earned runs in 12.2 innings of work.

Hoffman moved to single-A Fort Lauderdale in 1989, getting into 23 games in relief, posting an ERA of 5.19.

For 1990, though, Hoffman broke out with single-A Greensboro. Getting into 47 games, working 116 innings, Hoffman posted a sterling ERA of 1.47. He also struck out 93.

It was as a starter that Hoffman preferred to be used, he told The Daily Gazette in May 1992. He'd been a starter at Vanderbilt. But he also knew he had to pitch however the team needed him to pitch, and that was as a reliever.

"You can talk to (management) but I don't think it does any good," Hoffman told The Daily Gazette that May. "Whatever they tell you, you've got to do."

Hoffman did just that, getting into 35 games for AA Albany-Colonie, starting 14 games and relieving in 21.

But, by the time the season was out, Hoffman was gone.

The A-C Yankees made the playoffs, but the games took place with the backdrop of mourning.

The team wore Hoffman's initials on their left sleeves and his number 38 on the back of their caps, The Daily Gazette wrote. His uniform also had an honored spot in the dugout. The New York Yankees flew the team to Michigan for Hoffman's funeral, which took place on a playoff travel day.

Albany ended up losing in the first round to Canton, three games to none.

"I would have liked to have won. It would have been a fairy tale ending," A-C Yankees manager Dan Radison told The Daily Gazette after the playoff series loss. "It was a real emotional time, and this team showed a lot of class."