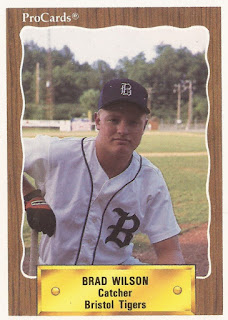 Brad Wilson hit a lot of home runs in his high school career, enough to get him a pro career.

His 50 home runs were enough to still have him eighth all-time in the state.

As a pro, though, Wilson's bat cooled. The catcher played just three seasons and hit only a handful of home runs. He never made AA.

Wilson's career began in 1989, taken by the Tigers in the second round of the draft out of Towns County High.

Wilson started with the Tigers at rookie Bristol. He got into 43 games, hit .221 and knocked a single home run.