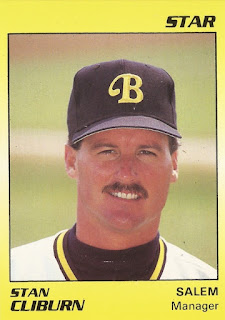 Stan Cliburn explained his goals as a minor league manager to The Tulsa World in 1993 and his goals focused on his players.

He wanted each player he managed to succeed, he told The World.

"I'm striving to get every position player between 250 and 300 at bats in a season and every relief pitcher at least 60 innings," Cliburn told The World. "I want everybody to have a chance. I want everybody to do well. I'm in everybody's corner, and I care for them and their careers."

Cliburn has been working to ensure his players do well now for more than a quarter century. He's managed from single-A on up to AAA and in independent ball, all after a 13-season playing career that saw him make the majors for 54 games in 1980.

Cliburn's long career in baseball began in 1974, taken by the Angels in the fifth round of the draft out of the University of Southern Mississippi. Cliburn is the twin brother fellow major leaguer Stew Cilburn.

Cliburn started with the Angels at rookie Idaho Falls. He made AA El Paso and AAA Salt Lake City in 1978. In 1980, he made California.

He started his post-playing career as a manager in 1988, helming short-season Watertown in the Pirates system. He then moved to single-A Augusta for 1989 and high-A Salem for 1990.

Cliburn managed outfielder Darwin Pennye in each of his first three seasons. Pennye, who played five pro seasons, praised Cliburn years later in an interview with The Greatest 21 Days.

"A lot of the success I had in the Pirates organization," Pennye said, "was because of the belief that Stan had in me. If you look at any time that Stan managed me, I had a lot of offensive success."

Cliburn managed at AA Tulsa in 1993 and 1994, then five seasons at independent Alexandria. In 2001, he arrived for his first, five-year stint at AA New Britain.

In August 2001, Cliburn watched his pitchers work out of multiple jams to secure the win.

"Given the circumstances, you couldn't ask for a more gutsy performance from our pitchers," Cliburn told The Lewiston Sun Journal. "We just pieced it together and it worked out like we planned."

Cliburn managed at AAA Rochester from 2006 to 2009. He's managed in independent ball since, continuing with independent New Britain in 2016.

After winning his 1,600th game as a manager in August 2016, Cliburn looked to others in comments to The New Britain Herald.