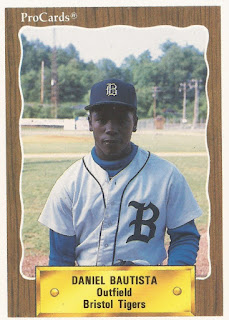 Fayetteville Generals right fielder Danny Bautista had a cannon for an arm in 1992, according to The Fayetteville Observer.

Opposing runners kept testing it - and losing, The Observer wrote that June.

Runners soon got to test Bautista's arm at higher levels. By 1993, they got to test his arm in the majors. Bautista went on to a major league career throwing out runners and scoring runs on his own that spanned 12 seasons.

Bautista topped more than 100 games played in three of those years and helped his team - the 2001 Arizona Diamondbacks - win a world championship in one.

Bautista's career began in 1990, signed by the Tigers as a free agent out of his native Dominican Republic.  He attended Eliseo Argentia High School. Bautista is also credited by his formal name, Daniel Bautista.

He moved to the Braves mid-1996, but lost a portion of the season to injury. A pitch hit him in the face and required surgery. He returned for 64 games in 1997 and 82 in 1998. That October, a Bautista error helped lead  to the Braves' Game 6 NLCS loss to the Padres.

In Game 6 of the World Series, Bautista knocked in five runs on three hits after seeing limited playing time in the previous two games.

"I've been playing off the bench," Bautista told The New York Daily News afterward. "You've got to stay focused."

His sixth-inning double off Roger Clemens in Game 7 put the Diamondbacks on the board in a game they would go on and win.

Bautista continued with the Diamondbacks for three more seasons. He underwent shoulder surgery in 2002. In April 2004, he hit two home runs in a game where he picked up five hits and five RBI.

"I've got a lot of confidence back," Bautista told The Associated Press after that 2004 game. "We know we're a very good team."

Bautista tried coming back for 2005 with the Rays, but he didn't make it out of spring training before he retired.