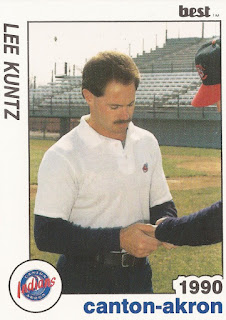 After a spate of injuries to his players, Washington Nationals head trainer Lee Kuntz tried to explain to The Washington Post the challenges of his job.

If players try to play hurt, Kuntz told The Post, he has to find them out.

"I've got to rely on what they're telling me," Kuntz told The Post that August. "I can't get in their heads. Because different guys -- one guy may tell you 'I'm fine,' and then another might tell you that, 'Hey, I'm dead.' You know, you've got to know the player and see it for what it's worth. You've got to observe him, too, when he's on the field. A lot of it is observation."

Kuntz spoke to The Post the year after he joined the big league club as head trainer. Kuntz made the Nationals as head trainer in 2007 after serving more than two decades as a trainer in the minors and four seasons as an assistant trainer for the Royals.

Kuntz' career as a trainer began in 1986 with the Indians at single-A Waterloo. A Pennsylvania-native, he signed on with the Cleveland organization out of Lockhaven University. He also achieved his masters at Tennessee Technical University.

After two early seasons at a sports medicine clinic, Kuntz joined the Indians for 1990 as trainer at AA Canton-Akron. He served 1994 at AAA Charlotte, diagnosing a shin contusion on a pitcher after an August game.

Kuntz first made the majors in 1999 with the Royals as assistant athletic trainer. That June, he monitored Ray Sanchez as he walked off the field after getting hit in the face by a throw.

Kuntz returned to the Indians for 2003 as the minor league rehab coordinator. For 2007, he won the Nationals' head trainer post.

In 2013, Kuntz was selected to be a trainer for the All-Star Game. He continued with the Nationals through 2015, when the club changed training staff.

Back in 2013, Kuntz also served as a mentor fellow Pennsylvania-native and Nationals assistant trainer Steve Gober, according to The Allentown Morning Call.