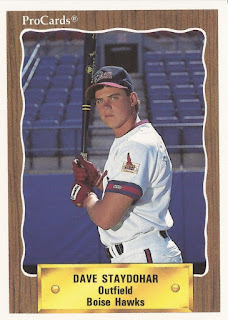 Dave Staydohar tied this August 1990 game with a home run and the Marlboro man got the worst of it, according to The Spokane Spokesman-Review.

Staydohar hit that home run for his Boise Hawks in the sixth inning, knocking it off the advertising sign in left field. The home run evened the score at two, The Spokesman-Review wrote, but the Hawks couldn't keep it up as Spokane went on to win the game.

Staydohar made short-season Boise that year, his second season as a pro. He went on to see time in just one more campaign. He never saw AA.

Staydohar's career began in 1989, taken by the Angels in the sixth round of the draft out of American River College in California.

Staydohar started with the Angels in the rookie Arizona League. He hit .208 over 21 games. He moved to Boise for 1990, increasing his average to .284 over 53 games. He also hit six home runs.

In addition to hitting the Marlboro man in August, Staydohar hit another home run in July, this one off the scoreboard in Eugene.