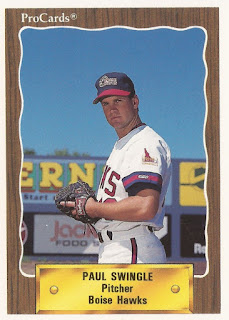 Paul Swingle explained his approach to baseball instruction to The Keene Sentinel in 2008.

His approach, he told The Sentinel, is rooted in his own professional career that spanned eight seasons.

"I try to use where I failed to help people out, and that's where I get huge results," Swingle told The Sentinel. "I understand very well the whole mental thing that a lot people don't. I feel very blessed to, unfortunately, go through the failing part of it, but experience some of the success of so many of the kids I work with."

Swingle may use playing failures in his instruction, but he can also use his successes. Chief among his successes: Swingle briefly made the major leagues with the Angels in 1993.

Swingle's career began in 1989, taken by the Angels in the 29th round of the draft out of Grand Canyon University. He's also listed as playing at Chapman University in California and Mesa Community College in Arizona.

Swingle played at Grand Canyon as a position player, hitting .340, but the Angels drafted him as a pitcher, he wrote in a blog post in 2008.

Swingle started with the Angels at short-season Bend. He got into nine games and had a 2.95 ERA. He went five innings of relief in an August game without giving up a run.

Swingle stayed in short-season for 1990, playing at Boise. In 14 relief outings, Swingle gave up a single run over 13.2 innings of work.

Swingle debuted with the Angels that September. He appeared in nine games in relief down the stretch. He gave up nine earned over 9.2 innings of work.

At the close of that month, Swingle gave up an extra-inning, game-winning home run to Hall of Famer George Brett.

"I stayed behind it and got it up in the jetstream," Brett told The Associated Press afterward. The home run Swingle gave up turned out to be Brett's 317th and last.

Swingle isn't recorded as playing in 1994, but he returned in 1995 with the Brewers at AAA New Orleans. He then played one more season, back in the Angels system in 1996, ending his career.

Swingle eventually settled in New Hampshire. He worked as a carpenter, managed the city's collegiate summer league team and has worked as an instructor.

In April 2016, one of Swingle's pupils, Erick Zecha, prepared to head off to college and recalled to The Sentinel Swingle's advice.