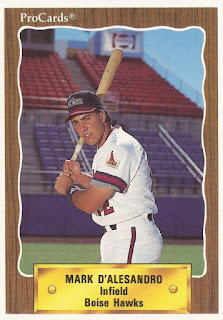 Two seasons removed from his last major league time, Mark Dalesandro remained optimistic in October 1997 about returning, according to The Champaign-Urbana News-Gazette.

He had reason to be hopeful. After all, the major leagues were expanding for 1998 creating more opportunities, The News-Gazette wrote.

"Hopefully, I'm one of them," the University of Illinois alum Dalesandro told The News-Gazette. "I just have to get in the right situation and with the right organization where I fit in."

Dalesandro found a place where he fit in that next year, if briefly. He returned to the majors in 1998 and 1999 with the Blue Jays, getting into 48 more major league games. Overall, he saw time in five major league seasons and 79 big league games..

Dalesandro's career began in 1990, taken by the Angels in the 18th round of the draft out of Illinois. Dalesandro is also credited as Mark D'Alesandro.

Dalesandro started with the Angels at short-season Boise. He moved to single-A Quad City for 1991 and then AA Midland and AAA Vancouver for 1993.

After his call-up in June, Dalesandro described the feeling to his hometown Chicago Tribune.

"It's all been a dream come true," Dalesandro told The Tribune. "I've got about 200 people coming to the games to see me. It's been kind of hectic the last week trying to arrange to get tickets, but it's great that they're getting a chance to see me. I hope I can get into a game for them."

He returned for another 11 games with the Angels in 1995. He then played the next two seasons at AAA, first with the Yankees and then with the Cubs.

After two more seasons in the minors, Dalesandro got into one final major league game in 2001, playing for his hometown White Sox. He then played his final pro time at AAA in 2002.

In 2012, Dalesandro's son Nick Dalesandro committed to Purdue for baseball. He credited his father with helping him along.