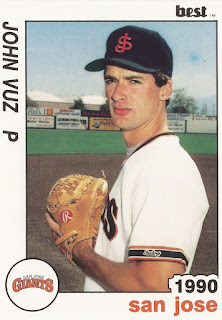 John Vuz did well enough in 1987 to make the Sun Belt All-Conference team, leading his Jacksonville University team in hits as the team's catcher.

As a pro, though, Vuz would soon turn his eye toward preventing hits, moving to the other end of the battery, moving to pitcher.

Vuz, though, never had enough success in his new position to earn a long professional career. He played just four seasons, never making it above high-A.

Vuz' professional career began that year in 1987, taken by the Giants in the 10th round of the June draft out of Jacksonville. Vuz moved on to Jacksonville after spending time Keystone College in Pennsylvania.

Vuz' career could have begun earlier. Vuz was taken in both the 1985 January draft and the June secondary phase, by the Pirates and Indians respectively. Vuz, though, chose to return to Keystone.

At Keystone, Vuz is counted among a short list of less than two dozen players to have moved on to the pros. None made the majors, though one former student, Christy Mathewson, did go on to some success in the majors.

Vuz played at Jacksonville for 1986 and 1987, before joining the Giants. With the Giants, Vuz started at rookie Pocatello, catching 30 games and hitting .237.

Vuz also got three appearances on the mound at Pocatello. By 1988, Vuz was almost exclusively a pitcher, playing between short-season Everett and single-A Clinton. In 28 relief outings at Everett, Vuz posted a 2.22 ERA, picking up four saves.