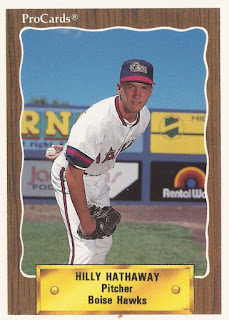 Hathaway struck out 17 Spokane batters and gave up four hits for the playoff win, according to The Spokane Spokesman-Review.

"That's one of the best pitching performances I've ever seen in my life," Ostermeyer told The Spokesman-Review. "I've seen some good ones, but I think that one took the cake."

While Ostermeyer never made the majors, the pitcher he saw that night did. Hathaway saw the majors in parts of two seasons, picking up four major league wins in 13 total major league outings.

Hathaway's career began in 1989, taken by the Angels in the 35th round of the draft out of State College of Florida, Manatee-Sarasota. Hathaway's given name is Hillary Hathaway, but he went by Hilly.

He then made single-A Quad City for 1991. In 1992, he moved to high-A Palm Springs, AA Midland and major league California.

Hathaway debuted for the Angels that September. He got into two games, starting one. He gave up five earned in 5.2 innings.

He then returned to the Angels for another 11 outings, all starts, in 1993. He picked up his first major league victory in June. He told The Associated Press the first win a relief.

"The hitters are not that much different up here, until you get behind," Hathaway told The AP. "When you get behind and make a mistake, they hit it a lot harder up here."

But what about his name? Hillary? He answered that question for The Los Angeles Times after his return that June. His father, also Hillary, gave him his name.

"It took me a long time for me to quit being mad at my father," Hathaway told The Times. "I mean, I was ragged on a lot, but after awhile you learn to live with it."