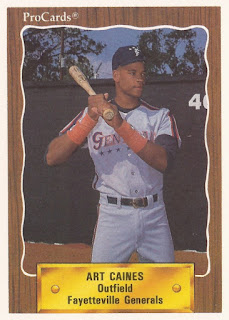 In three early starts, he went a total of 3 for 9. He also hit a big three-run home run against Columbia, The Observer wrote.

Caines couldn't keep it up. In his second professional season, he ended up hitting .211. He didn't come back for a third.

Caines' career began in 1989, signed by the Tigers as a free agent out of his native Dominican Republic. Caines is also credited as Art Caines.

He then moved to single-A Fayetteville to start 1990. He knocked in two runs there in a May game. He later moved to short-season Niagara Falls. Overall, he hit five home runs, with 43 RBI, marking the end of his brief career.