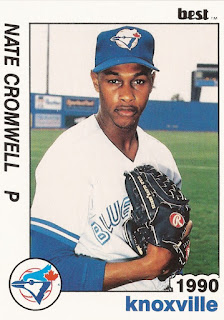 Nate Cromwell made the Florida State League All-Star team in 1989 with the Dunedin Blue Jays, earning the start and the win.

Cromwell showed he deserved that All-Star selection by going on to post a 12-6 record and striking out a league-record 161 batters.

With that success at Dunedin, Cromwell made AA Knoxville the next year. But, in a career that spanned 11 seasons, Cromwell couldn't replicate that success. He only got brief looks at AAA years afterward and never got a look at the majors.

Cromwell's career began in 1987, taken by the Blue Jays in the 11th round of the draft, out of Las Vegas' Chaparral High.

Cromwell played that first season at rookie Medicine Hat, going 4-6, with a 4.31 ERA, along with 47 strikeouts in 54.1 innings.

Cromwell hit Dunedin in 1989, then Knoxville in 1990. At Knoxville, though, Cromwell went just 5-14 with a 5.56 ERA. In September, Cromwell spent a brief time in the Braves organization, claimed off waivers. The Braves, though, traded him back to the Blue Jays in November.

Cromwell arrived in the Padres system for 1993, playing largely at AA Wichita, but getting two starts at AAA Las Vegas. He went 0-2 pitching in his hometown.

At Wichita, Cromwell went 3-5, with a 4.13 ERA. In one outing, Cromwell himself provided the offense, a solo home run in a 1-0 Wichita win, The Los Angeles Times wrote.

He only got 13 outings in 1995, his last in affiliated ball. Four of those came at high-A Rancho Cucamonga, nine back home in Las Vegas.

In 1996, Cromwell tried independent ball, getting four outings with the independent Newburgh Night Hawks. In April 1997, Cromwell looked forward to an audition with the Yankees, The Las Vegas Sun wrote. But Cromwell didn't end up signed.

Cromwell's final look at the pros came in 1998, in the independent Western League. Cromwell got three final starts with the Sonoma County Crushers. He went 1-2.

Cromwell's name, though, came back in 2010. That's when Joel Carreno, a right-hander who has since made his big-league debut, struck out the first two batters he saw in a late-August game.