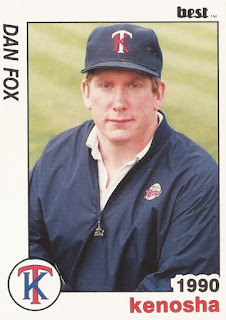 Dan Fox' career helping players come back from injury started with is own injury suffered playing football in college, according to The Hudson Star Observer.

From that injury, Fox recalled to The Star Observer in 2006, came a career as a trainer that he loved.

"I don't know what else I would do," Fox told The Star Observer. "You can either fight it (injury) or go with it and let it take you where it takes you."

Fox' injury has taken him to well over a quarter century working with players both in the pros and at younger levels, helping to ensure they return from injury and stay healthy.

Fox started at the University of Wisconsin at LaCrosse, graduating from there and becoming a trainer in the minors.

He served as trainer with the Twins at single-A Kenosha in 1989 and 1990. He also served as a trainer for the Kalamazoo Wings minor league hockey team.