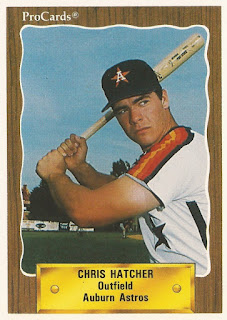 After seven seasons in the minors for the Astros, Chris Hatcher looked ahead.

His future, he explained to The Tucson Citizen in 1996, didn't appear to be with Houston.

"They're likely not going to protect me since they have what they need as far as outfielders go," Hatcher told The Citizen. "It's an opportunity to catch on with someone else and see what’s out there."

Hatcher did catch on with some one else, the Kansas City Royals. Two years later, Hatcher found himself in one brief trip to the majors.

Hatcher's career began in 1990, taken by the Astros in the third round of the draft out of the University of Iowa. He grew up in Council Bluffs.

After returning to Tucson in May 1996, Hatcher explained to The Citizen what might be holding him back.

"There are a lot of problems I do have," Hatcher told The Citizen. "Defensively, I am not as good as some of the guys we have here, but I am striving to be that good. Offensively, my strikeouts have been bad in the past but I have improved and I have some things to show people."

Hatcher showed the Royals enough that they signed him for 1997. He played that year mostly in Omaha, just across the Missouri River from where he grew up.

Hatcher got into eight games for the Royals, 15 at bats. He picked up one hit. He then returned to the minors, signing with Colorado and playing 1999 at AAA Colorado Springs.

"It can be a mental battle to keep going," Hatcher told The Los Angeles Times in July 1999. "Sometimes you don't feel motivated because it feels like it doesn't matter what you do. But knowing what's out there at the big league level, that I can get some [financial] security for my family, that keeps me motivated."