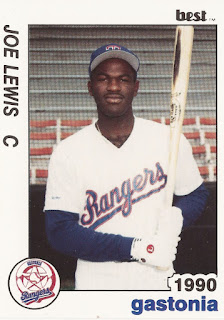 The Spartanburg Phillie took off for second, but Gastonia catcher Joe Lewis was having none of it.

Lewis cut down that runner in his second season as a pro. He played in just one more.

Lewis' career began in 1988, signed by the Rangers as an undrafted free agent out of Louisiana State University.

Lewis is credited as being drafted previously, taken in the third round of the 1986 draft out of St. Amant High School in Louisiana. He did not sign.

By 1987, he was at LSU. In 31 games, he hit .222. He hit two home runs and had 17 RBI. His Tigers made the College World Series that year. Lewis struck out in a first-round game. On the way to Omaha, he scored the go-ahead run in a regional game.

Lewis is only credited as playing that one season with LSU. He hit the field with the Rangers in 1988. He got into 34 games at rookie Butte that year, hitting .238, with nine RBI.