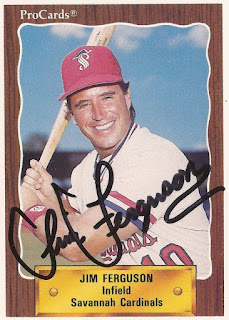 Jim Ferguson started his pro career with independent Salt Lake in 1987 and he played well. But Salt Lake wasn't where he really wanted to be.

Where he and his teammates wanted to be was in a major league organization. Many of them, including Ferguson, got there. Ferguson's organization: the St. Louis Cardinals.

"It was great," Ferguson said of making the Cardinals organization. "That's what I dreamed about all my life, getting the opportunity. The season with the Trappers was unbelievable and was without a doubt the best summer of my life ... but to get an opportunity to give it a go to make a big league team, that's what we all wanted."

Ferguson's opportunity came with an invitation to spring training 1988. He played well, earned a full contract and an assignment to single-A Savannah.

"I was ecstatic for the opportunity to play," Ferguson said. "To sign with the Cardinals was a great thrill."

Ferguson stuck around with the Cardinals for three seasons. He largely played those seasons at Savannah. He never made AA. He has since moved on to a different kind of career in sports, one in golf.

Ferguson spoke to The Greatest 21 Days by phone recently from his home state of Connecticut. He's now an assistant PGA professional at Wallingford Country Club in Wallingford, Conn.
Ferguson got his opportunity with the Cardinals after a season with the Trappers where Ferguson and the team rattled off 29 straight wins, a record. The team also won the league title.

He worked that off-season back in Miami, at the University of Miami book store. He also worked out at a local high school there with a friend from the Pirates organization.

Barry Moss, the Trappers coach who initially convinced Salt Lake to sign Ferguson, called with the good news: The Cardinals wanted to bring Ferguson to spring training. There was no guaranteed spot on a team, but he he had the chance.

Ferguson arrived and he did well, well enough that he believed he'd get signed. The question was where they would put him. The Cardinals signed him and they put him at Savannah.

His success continued into the first part of the season, he recalled. He even thought he might get moved  up. Then he hit a slump. By the end of the year, his average had dropped to .223.

Ferguson had success in college. He had success with the Trappers. Now, in 1988 at Savannah, he wasn't doing as well.

"It's kind of tough," Ferguson said of that patch. "But you've just got to grind it out every day, do whatever you can. The bottom line is to do whatever you can to help your ball club win. If you're not hitting, try do something and hopefully things will come back."
Ferguson returned to Savannah for 1989. He hit .251, with 30 RBI. Over his three seasons playing at Savannah, Ferguson joked he earned the key to the city.

He recalled returning to Savannah as disappointing. At the same time his return there in 1989 and 1990 also meant he still had a job. He still had another chance.

"I just went in with the attitude of work herd, put up the numbers and that's all you can do and take it from there," Ferguson said. "I was fortunate for the Cardinals to invite me back and I had a place to play."

After that 1989 season, Ferguson's had another place to play, in Australia.

Ferguson recalled getting a call from the general manager of the Adelaide Giants, Kingsly Wellington. Ferguson answered the call, but he recalled not being convinced Wellington was who he said he was.

"I thought it was one of my friends having fun with me," Ferguson said, "and he goes 'how'd you like to come over to Australia and play some ball?' and I'm like 'yeah, sure, no problem.'"

As it turned out, it was a very real offer. Soon, Ferguson was off to Australia to participate in the first year of the Australian Baseball League. "I loved Australia," Ferguson said. "I had a great time there, as well."
Back in the United States for 1990, Ferguson returned to familiar territory, Savannah, Ga. He did get a brief stint at high-A St. Petersburg that year. He got into six games there, picking up one hit in three at bats. He mostly spent his time there as a late-inning defensive replacement.

During his three seasons at Savannah, Ferguson recalled hitting one of his few home runs on an unusual play. "The manager gave me a hit-and-run sign," Ferguson recalled, "and I hit it out of the park."

He also recalled getting a couple game winning hits.

As the 1990 season came to a close, Ferguson recalled hearing talk that he might be better off leaving his playing days behind and becoming a coach. Ferguson didn't want to do that. He still thought he could play.

Then came the message in spring 1991: His time with the Cardinals was done. He spent the spring on the club's AA roster. He didn't make the season roster.

"Ted Simmons said to me 'We know you can play AA and you could probably play at AAA, but you're not going to make it to the big leagues. Not with us, anyways,'" Ferguson recalled. "So basically that was the writing on the wall."

His career wasn't completely over, though. Ferguson still had one last run in him - in Europe. (Part 4)