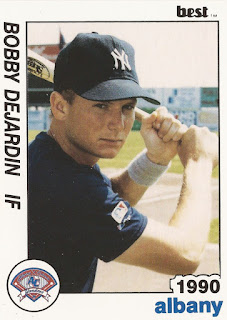 Bobby DeJardin's biggest edge in 1988, his first year of pro ball, was likely mental, the scout who signed him told The Los Angeles Times.

"He's a bright, mature player," the scout, Chris Smith, told The Times. "He's not an overpowering hitter, but he'll find a way to get on base and set the table for the big guys. He's a contact hitter. He uses the whole field, so he's valuable at the top of the lineup."

DeJardin climbed from there to single-A, then AA and AAA in 1992. DeJardin, though, never took that last step to the majors.

His career began that year in 1988, taken by the Yankees in the eighth round, out of Loyola Marymount University in Los Angeles.

DeJardin played his first year at short-season Oneonta, hitting .294 over 69 games. He also knocked in 27 and stole 15 bases. DeJardin made single-A Prince William for 1989, hitting .278 there.

"We'll turn it around," DeJardin told The Daily Gazette. "We just have to swing down on the ball. Everybody's taking long swings. That produces fly balls."

The New York Times noted in spring 1993 that DeJardin was behind several other infielders for a spot in the Bronx. DeJardin, though, told of how close he was.

"You can smell it," DeJardin told The NY Times. "You see the way these guys play and you know you can play with them. It's just a matter of someone giving you an opportunity."

DeJardin continued playing into 1995, but he never made the majors. He has since gone on to stay in the game as a scout, credited for 2004 to 2006 working with the Angels.