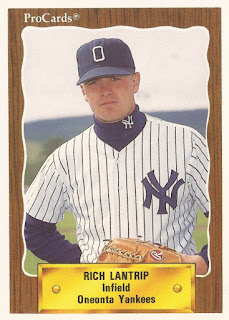 Rick Lantrip hit a late home run in this August 1991 game for single-A Greensboro and he did it off a kind of pitcher he rarely hit off of, according to The Greensboro News & Record.

"I hate sidewinders," Lantrip told The News & Record. "I don't know what it is about them, but I've never been able to hit them."

Lantrip ultimately wasn't able to hit enough all kinds of pitchers. That 1991 season was Lamtrip's second as a pro. He hit .213. He played just one more year.

Lantrip's career began in 1990, taken by the Yankees in the fifth round of the draft out of Fresno State University. Lantrip was also credited as Rich Lantrip.

Out of Visalia's Golden West High School in 1987, Lantrip was set to be a first-round pick, except he told all the teams he was college-bound, according to McClatchy News Service. Despite his pronouncement, the Mariners took a chance on him in the fourth round.

"In an average year, there are maybe 10 prospects who are clearly in a class by themselves," Mariners GM Dick Balderson told McClatchy. "This year, I'd say there were eight. And I put Rick Lantrip in that class. And I'm optimistic that we can sign him."

The Mariners didn't sign Lantrip. Instead, he went to the University of Arizona and then to Fresno State and the Yankees in 1990.

Lantrip played his first season in the Yankees organization at short-season Oneonta. The infielder played mainly at third. He got into 70 games and hit just .183.

He moved to Greensboro for 1991. He played mainly at shortstop that year, getting into 96 games. He hit seven home runs and knocked in 35.

Lantrip played his third season back at Greensboro and hit a career-high .253. He hit 15 home runs and knocked in 68. It was his final season as a pro.

Lantrip has since returned to his hometown and his old high school. Lantrip took over as Golden West High baseball coach in 2013.

"Being alumni, the program has meant a lot to me in my baseball history," Lantrip told The Visalia Times Delta that June. "I learned a lot from my coaches I played for there. I hope to extend that learning experience to the players that will play under myself and the coaching staff."
1990 Minor League Tally
Players/Coaches Featured: 2,131
Made the Majors: 920-43.2%
Never Made Majors:1,211-56.8%-X
5+ Seasons in the Majors: 391
10+ Seasons in the Minors:228
Posted by Steve78 at 11:15 PM