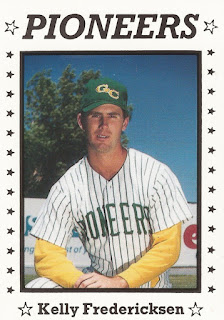 It was a move that rarely works, but Gate City's Kelly Frederiksen made it work, and preserve a tie game.

With runners on first and third in the eighth inning of this July 1990 contest, Frederiksen faked to first, then turned and threw to third. The threw cut down the potential go-ahead run as the Salt Lake runner wandered to far off the base, according to The Deseret News.

"It was a play you don't see much executed to perfection," Salt Lake manager Nick Belmonte told The News later.

Frederiksen was in his first year as a pro that season at Gate City. He was also in his last year. His pro career lasted just 20 outings, five starts.

Frederiksen originally signed that year with the Expos, out of Brigham Young University, according to his ProCards card. But he soon was optioned to independent Gate City in Pocatello, Idaho.

With Brigham Young, Frederiksen is credited as playing in 1985, and then in 1989 and 1990. In July 1989, Frederiksen went with a group of five BYU players on a baseball diplomacy trip to Nicaragua.

With Gate City, Frederiksen got into those 20 games, starting five. He went 1-7. His sixth loss came in a mid-August outing where he went four innings, errors helping end his night. He ended the season with a 5.43 ERA. He also picked up three saves. It was his only season as a pro.