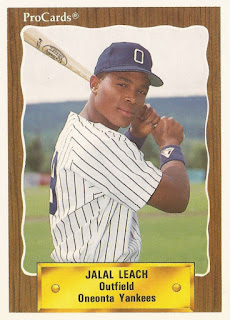 Jalal Leach's power numbers were up at AA Albany-Colonie in 1993, but he knew he still had a lot to prove, he told The Schenectady Daily Gazette that August.

"For some reason, maybe it's just to motivate himself, I think I have to go out and prove myself every day," Leach told The Daily Gazette, "whether it's to the Yankees, the team we're playing against or to my peers."

Leach eventually did prove himself, but it took him eight more years to do it. He was in his fourth professional season that year in 1993. He went on to make the majors, but he didn't make it there until 2001 - his 12th season as a pro.

Leach made with the Giants, getting into all of eight games with the big club. He's since gone on to a career working to help others to success in the game, working as a scout, as well as a mentor.

Leach's long playing career began in 1990, taken by the Yankees in the seventh round out of Pepperdine University in California.

He first made AAA in 1994 at Columbus. It then took him seven more years to take that last step to the majors.

Leach returned to AAA with the Yankees in 1995. He then moved through the Expos, Mariners, Giants and Phillies systems.

In 2000, Leach was with AAA Scranton in the Phillies system. He told The Wilkes-Barre Times Leader that May why he was still playing.

"I could probably make more money doing something else," Leach told The Times Leader. "But my mom knows how much baseball means to me. She says life is about choices, and that I should keep playing baseball as long as I enjoy it."

Leach returned to the Giants system for 2001. That September, he got his call to San Francisco. He debuted Sept. 5 against Arizona.

Knowing how long it took him to get there, the crowd gave him a standing ovation, The San Francisco Chronicle wrote.

"I was so focused going up there on swinging at a good pitch," Leach told The Chronicle, "I didn't really hear the crowd until I hit the ball. The ball came up there and I thought, 'That's in my happy zone,' but I got out in front of it."

Leach flew out on that at bat. He ended up getting a total of 10 major league at bats. He got one hit, an RBI single against the Astros Sept. 19.

Leach returned to the minors for 2002 and 2003. He also had time in independent ball and in Mexico, playing his final game in 2004.

Leach has since gone on to be a scout, serving with the Yankees in 2015. He also runs his own youth baseball program called the Baseball Mentoring Program, according to The Sacramento Bee.