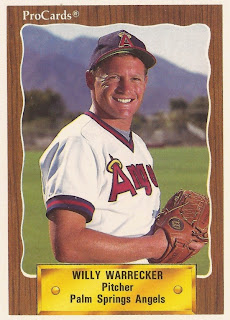 Wally Warrecker pitched his University of California team to a win in April 1989 and he did it on ESPN, according to The Moscow-Pullman Daily News.

"I felt strong, but I was losing a little in the ninth," Warrecker told The Daily News. "But I didn't want to throw a curve and watch it go 415 feet. I felt like I had a little juice left."

Warrecker went on from California to turn pro that year. His professional career ended up being brief, lasting just two seasons.

Warrecker's career began that June, taken by the Angels in the 24th round of the draft out of the University of California, Berkeley.

Warrecker started with the Angels at short-season Bend. He got into 18 games in relief there and had a 4.55 ERA. He picked up one of his two losses in a June game, going 1.1 innings and giving up three earned.