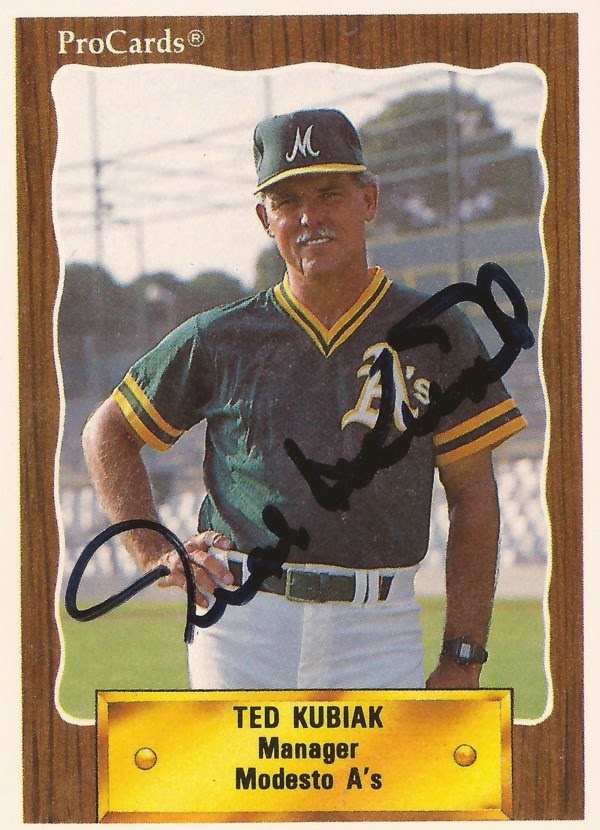 The first time Ted Kubiak stepped into the dugout as a manager was at AAA.

It wasn't really the start Kubiak had envisioned as he tried to learn his new role leading a team.

"Honestly, the first night I spent in the dugout ... I said I don't know if I can do this," Kubiak told The Greatest 21 Days recently of that job filling in for the regular manager. "'There's just so much to see, so much to do. There's so much to be aware of.'

Kubiak eventually did know about it, learning the job over time. He also learned it well, as he has continued to manage in the minors in the quarter century since. For 2014, he's serving as manager at short-season Mahoning Valley.

Kubiak spoke with The Greatest 21 Days recently at Joe Bruno Stadium in Troy, NY, before his Scrappers took on the Valley Cats in a New York-Penn League contest.

Kubiak told of his time growing up in New Jersey, then working to make the major leagues as a pro. As a pro, he told of playing for the three-time world champion Athletics teams as a utility player, but also proving he could be a regular with the Brewers.

Looking back on that first experience at Tacoma, Kubiak said he laughs now at some of the things he did. But, after that stint, he settled in at his full time job managing single-A Modesto.

Kubiak recalled his method of learning the job as a simple one.

"I just did what I thought was right," he said. "I mean, I learned along the way.

"I don't know what I knew when I started, but I know a heck of a lot more now about how to deal with players, personnel and how to run the games."

He also reached back to his playing days and lessons he learned along the way.

"I took everything, my own experience and my own dedication to winning and the way I knew how to battle and the right way to play the game," Kubiak said. "I just tried to instill that in the players."

The 72-year-old Kubiak said he's also now putting his many experiences in the game down for a book.

Kubiak ended up spending five full seasons at Modesto, his last in 1993. He then moved to the Indians system as manager at AA Canton-Akron.

Over his quarter century as a minor league manager, Kubiak said he's learned to "go with the flow."

He has to implement organizational policies, but he also gets to do his own thing.
"I still kind of throw some thins at (the players) that probably shock them," Kubiak said. "But I think they need that. I think they're let off the hook too often."

Kubiak was speaking in the visitor's manager's office. Just then, hitting coach Phil Clark came in.

"But Phil and I keep them in line, right Phil?" Kubiak said. Clark answered in the affirmative.


Kubiak said he's also picked up ideas from other managers along the way, including Dick Williams and Tony LaRussa. He may recall how they handled a situation and maybe do it that way himself, he said.

In the end, though, he said he learned that he has to do what he things is right.

"I did learn that if I go home at night and I'm ambivolent about something that I did during the game, that that's not right," Kubiak said. "I have to go with my gut all the time. That was a big thing I learned.

"Because I think I'm pretty aware of what's going on," Kubiak said. "I'm not always correct, but moreso than not."