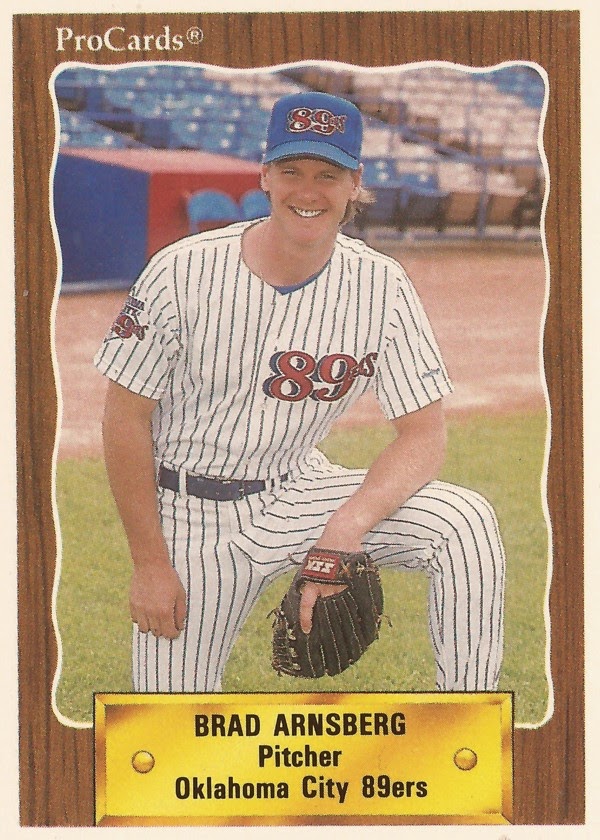 The Yankees were still in first place on Aug. 5, 1987 and Brad Arnsberg kept them there. With six innings and gave up no runs against the Indians for his first major league win.

"He really showed some poise," Yankees manager Lou Piniella told The New York Times afterward. "When he had to come up with a big out, he did. It was a strong effort."

Arnsberg was in his second season with the Yankees, having gotten into two games the previous year. He would see time in four more major league seasons before embarking on a career as a coach, a career that has him serving as a major league coach for a decade.

Arnsberg's career began in 1983, taken by the Yankees in the first round of the June secondary draft. He made AA Albany-Colonie in 1985, going 14-2 with a sub-2 ERA, at 1.59. He then made AAA Columbus and the Bronx in 1986. In August 1986, for Columbus, Arnsberg came within two outs of a no-hitter against Syracuse, retiring 21 batters in a row at one point, according to The Times.

His 1987 season with the Yankees comprised a total of six appearances. His overall ERA would climb to 5.59. An outing days after the one that Pinella praised, Arnsberg gave up three home runs in two innings, according to The Times.

The Yankees would sink out of the race and Arnsberg would soon be traded. In November, he was sent to the Rangers and it wasn't soon enough for the right hander.

"I was glad to get out of there," Arnsberg told The South Florida Sun Sentinel in March 1988. "In a lot of organizations, I would have already been in the big leagues. ... With the Yankees, they brought me to the big leagues and put me in the bullpen. I had been nothing but a starter all my life."

Arnsberg was pegged as a rookie to watch for 1988. But Arnsberg wouldn't pitch for anybody that year, elbow surgery saw to that. A tendon from his left wrist was implanted into his right elbow. He was out for the year.

Arnsberg returned for 1989, his best, though was the next campaign. In 1990, Arnsberg pitched in 53 games for the Rangers posting a 2.15 ERA. Nine more games for Texas in 1991 and eight more for the Angels in 1992 and Arnsberg's major league days were done. Another year in the minors and his playing days were done.

Arnsberg signed on in 1994 as the pitching coach at AAA Syracuse. By 2000, he was pitching coach for the Expos and 2002 for the Marlins. He was fired in May 2003 in the Jeff Torborg shakeup.

Catching back on with the Blue Jays, Arnsberg served there through 2009. There, Arnsberg was praised for his work with young pitchers.

"He's so prepared," Roy Halladay told Slam Sports in May 2009. "He's one of the guys, more like a teammate. Look at his track record with all the young arms."

Arnsberg was named pitching coach for the Astros for 2010.

"Adding Brad Arnsberg to our staff represents a huge step in the right direction," Astros GM Ed Wade told reporters after the hire. "Brad has a wealth of Major League coaching experience and has a proven track record of success working with both veterans and younger pitchers. He is a key hire for the Astros."

His stay, though, wasn't long. He was let go in June 2011 over philosophical differences with Astros GM Ed Wade.