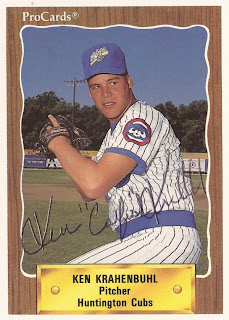 It was a spring training split-squad game, but that didn't matter.

For Ken Krahenbuhl, who by now had already come back from two serious arm injuries, it was amazing.

Krahenbuhl had been drafted the year before by the Cubs, but an arm injury, his second since high school, sidelined him his first year. Now, in spring training 1992, Krahenbuhl was getting to take the mound in relief, a minor leaguer filling out a spring training split-squad roster.

With a runner on first and one out, Krahenbuhl threw three pitches, he recalled, inducing the Indians hitter to ground out into a double play. "It was awesome," Krahenbuhl recalled. "It was amazing."

For Krahenbuhl, in a professional career that spanned eight seasons, persistent injuries would mean that would be the closest he would get to the majors.
Krahenbuhl, though, would continue to pitch, and come back from another major arm surgery to do so. It was in independent ball that Krahenbuhl continued his career. It was also in independent ball that he would make his name, though not in a way he really wanted or intended.

Krahenbuhl spoke with The Greatest 21 Days recently by phone from his California home. Krahenbuhl spoke about what got him to the pros, growing up in Southern California drawing the interests of scouts at the age of 16 with a 90 mph fastball, all as the son of foster parents.

He also spoke of turning pro, his constant battle with injuries, his new baseball life in independent ball and his ultimate turn to coaching youth and helping them get to college.

And he talked about The Trade, the one that sent him from one independent team to another, essentially in exchange for 10 pounds of catfish. And how he came out in his first start with his new team made the legend his own, by throwing a perfect game.

Krahenbuhl's first taste of pro life came in June 1990, taken by the Cubs in the 19th round of the draft out of San Bernardino Valley College. He had already made it back from blowing out his arm his senior year in high school. But, as the Cubs drafted him, his arm was hurting again, this time it was his shoulder.

An MRI revealed a rotator cuff tear. The examination and surgery happened in Chicago, the same time as the 1990 All-Star Game at Wrigley Field. Krahenbuhl recalled going to the game before starting his rehab with the club's rookie ball team in Huntington, W.V.
His first year in pro ball was rehab. He didn't pitch at all for Huntington. Soon, his shoulder started feeling better and Krahenbuhl seemed to be on track again.

For 1991, the rebuilt Krahenbuhl was assigned to single-A Peoria. And he ended up playing the entire year there, getting 23 starts. He went 7-8, with a 3.96 ERA, but he was pitching.

"They were just baseball fanatics," Krahenbuhl recalled of the Peoria fans. "The community welcomed me, the team welcomed me, and I felt like 100 percent."

"To pitch with no pain is a big deal for a pitcher," Krahenbuhl said. "So my first year in pro ball was awesome."

Krahenbuhl also got to spend time that season with a rehabbing Rick Sutcliffe, and got to know the  pitching coach Billy Connors through that.

And Krahenbuhl did well enough to get that appearance in that split-squad spring game, and to move up to high-A Winston-Salem for 1992. But the pain came back. After 11 outings trying relief at Winston-Salem, Krahenbuhl played the rest of the year at Peoria.

He went 7-7 at Peoria as a starter again, with a 3.35 ERA. But his elbow was still acting up. At the end of spring training 1993, the Cubs released him. The arm injuries were just too much.

"It was hard, I think it's hard on any player," Krahenbuhl said of getting his release. "I think, as an athlete, there comes a day when they tell you that you can't play anymore. It happens to every single athlete and that happened to be my day."

Krahenbuhl recalled the frustration of the rehabs, working to get better, then getting hurt again. Maybe it was all the innings he pitched in high school, with the 90 mph fastball that first caught the eye of scouts. But it kept happening.


From his release, Krahenbuhl thought his career was over. He started coaching, working with his old college coach Stan Sanchez. But then he heard about independent ball.

Krahenbuhl's return came with a call from a new team in Rochester, Minn., the fledgeling Northern League's Rochester Aces. His elbow was still hurting, he recalled, but he also still wanted to play.
He ended up getting six starts for Rochester, finally pulling his ligament off the bone again. And again Krahenbuhl went through the surgery and the rehab.

He never threw at top speeds again after 1992. But he was able to pitch. He threw in the high 80s, had a slider, had a curveball.

"Instead of being a thrower, like I was in pro ball, I had to become a pitcher," Krahenbuhl said. "I had to learn breaking balls."

So, after yet another surgery, Krahenbuhl came back again. This time, the comeback didn't happen until 1995. That April, Krahenbuhl got a call from another start-up league, the Western League's Palm Springs Suns.

There, he was lured by former Dodgers GM Al Campanis and a coaching staff that included Bill Sudakis, Steve Yeager and Lee Lacy. By then, too, his latest rehab was behind him,

It was the first time in three years that he had no pain, Krahenbuhl said. And it was the start of the second half of his career in independent ball, a career that would take him to Oxnard, Calif., Greenville, Miss., and Good Morning America.