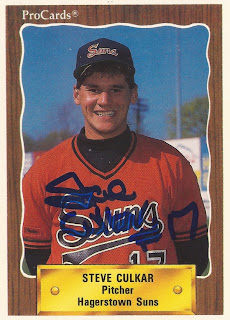 Steve Culkar's Mount Prospect Post 525 American Legion team was playing for the regional championship and the college scouts were watching.

Culkar, though, wasn't watching them. He and his teammates focused on the game.

"No one, no one thought about the scouts, or anything like that," Culkar recalled to The Greatest 21 Days recently. "We were focused on winning."

Post 525 didn't end up wining the regional championship, but they did win the state of Illinois. And Culkar also caught the eye of a college scout, one for the University of Kentucky.

Shortly after, the Chicago-area native Culkar was a Wildcat.

"I loved it," Culkar said of his time at Kentucky, "It was the best experience of my life, fantastic."

Four years after that, degree in-hand, he was a pro.

Culkar spoke with The Greatest 21 Days recently about that career, his time playing the game growing up, playing under a "coach to men" at Kentucky and a professional career that took him to AAA and then ended with an injury and some hard feelings.

Culkar has since gone on to use that degree he earned at Kentucky, a degree he focused on getting, to a post-playing career in sports communications and marketing.

Culkar grew up in the Chicago suburbs. He doesn't remember exactly when he first picked up a baseball.

"I just know that I was always outside with a baseball, with a bat, knocking on somebody's door, begging somebody to go play ball with me," Culkar said.

He'd beg for somebody to play catch with him, hit with him. They could even hit, he'd just field.

Culkar played catcher in little league. He thought he could hit. By the time college came around, though, he left that behind, sticking to pitching.

He did well enough in high school, playing on that American Legion team, well enough to go to Kentucky.

Through that whole time frame, the pros weren't really on his mind, he recalled.

If the pros came, that would take care of itself.

First, though, was college, and Kentucky.

Part of the reason he liked Kentucky, Culkar recalled, was just that it was warmer. In Kentucky, baseball could be played nearly year round. In Chicago, that wasn't the case.

But Kentucky also provided a high level of play, playing against outher Southeastern Conference teams. There as LSU, Georgia, Florida. "There were some very, very good baseball players that you faced day in and day out," Culkar recalled.

It was also at Kentucky that Culker met the man whom he counts as one of the biggest influences on his life, then-Kentucky head coach Keith Madison.

It was Madison, Culkar recalled, who was a coach to men first, and a coach to baseball players second.

Madison, Culkar recalled, wasn't there just for baseball. He was there to help his players grow as people.

"He wanted you to be a better person and a better ball player," Culkar said, "in that order."

On the field, Culkar played well enough to get drafted after his junior year. The Pirates selected him in the 29th round.

For Culkar, though, there was no consideration of going pro. In fact, he had made his position known.

"They tried to entice me with more money," Culkar recalled. "But I wanted to come back to get my education."

"Getting to the big leagues isn't a guarentee," Culkar added. "But your education is. That was the most important thing to me."

He also wanted to grow as a player, to get better. That senior year, he recalled, he played even better. The result was a 14th-round selection by the Orioles.

Soon, he signed. Culkar recalled meeting with one of the scouts, signing papers then heading to a local travel agency. The scout put down a credit card and Culkar had his ticket to Miami, then-home to the Orioles' spring facilities.
"Three days later, I'm down in Miami with everybody else and we started our professional careers," Culkar recalled. "It was just unbelievably exciting."

He then started his pro career.

Culkar played his first season between rookie Bluefield and short-season Newark. He got into 11 games between them, hampered by a bit of tendonitis.

The fields themselves, Culkar recalled, were awful. But he also realized that was how everybody else had started, on those same fields.

"That's the process you go through," Culkar recalled of his thinking. "Knowing that this is where Cal Ripken started, other people in the big leagues right now, they played on these same fields. If it was good enough for them, it's good enough for you."

Then, in his second season, Culkar made it all the way to AA.