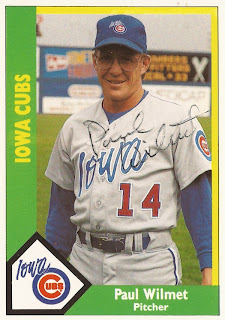 Whether it was Paul Wilmet's talent, or that he was a warm body who could fill a roster, Wilmet finally had not just one scout looking at him, but he had two.

Wilmet was 21 years old and four years out of high school. He was also coming off a semester of college, but he'd spent the rest of that time on the road, pursuing his other dream, music.

Now, he was pursuing his baseball dream, playing summer ball in his home state of Wisconsin. He was pursuing it after failing to get much interest from scouts earlier, even after an energetic letter-writing campaign.

He finally got that interest as his summer league team visited Beloit this summer in 1981. The two scouts, one from the Dodgers and one from the Mets, Wilmet recalled, were each looking to do the latter, just fill out rosters. And they were both looking to Wilmet to help do that.

The solution, Wilmet recalled to The Greatest 21 Days, was a coin flip. The Mets scout won.

"The next day I was on an airplane," Wilmet recalled, not caring how he was signed, just that he was. "It was a dream come true. I signed my contract right out in the parking lot of the ballpark."

For Wilmet, it was the start of a decade-long professional baseball career, one that eventually saw him make the major leagues.

Wilmet spoke to The Greatest 21 Days recently by phone from his native Green Bay, where he was visiting family. Since 2004, he has lived in Nashville, working as a singer, songwriter and producer. (Link: Download Wilmet's album "Reality")

Wilmet and the guys he played with played Top 40 hits or jazz music six, sometimes seven nights a week, making good money. And he did that until one night, playing in Grand Rapids, Mich., that he decided he needed to pursue his other dream, his baseball dream.

"So I gave up a lot to pursue my dream at that time, and that was kind of hard to do," Wilmet said.

Once he decided that, though, he committed himself to it.

Finally, he got a scout from the White Sox to come take a look at him in Appleton. Wilmet recalled throwing well, but the scout wanted to see Wilmet play college ball.

Shortly after that, it was a Reds tryout camp. He threw well there again, but he eventually landed in college, at Des Moines Area Community College. He played the spring quarter there, didn't get interest in the draft, then wound up playing for that hometown amateur league team - and signing that first contract.

Wilmet's first stop as a pro was Little Falls, NY, with the Mets' short-season team. He also recalled going right to work to try and make himself better,

Wilmet called himself a student of the game. He wasn't a player to sit around. He watched the opposing team's batting practice, watched for the hitters' tendencies.

"I always wanted to have an edge," Wilmet said. "You know, I didn't have overpowering stuff. I had decent stuff, but I knew how to pitch and I knew how to get people out."

As far as ballparks go, Wilmet remembered Little Falls' park being one of the nicer ones, Utica's not so much.

Then there was the transportation.

"We'd go to Oneonta, then to Utica and we'd ride on a school bus with no air conditioning," Wilmet recalled. "We wouldn't shower after the game, just get on the bus. It stunk, but we had a lot of fun."

Wilmet ended up getting 20 outings at Little Falls, before moving to single-A Lynchburg. He returned to Lynchburg for his second season. But then an old high school hip injury flared up.

Something else had also set in, his drinking and drug addiction. Along with the injury came attitude problems and arguments with his manager, problems he traced to his addictions. They were the addictions he would later have to overcome before he finally got his shot at the majors.

After missing the entire 1983 season, Wilmet again found himself without a team. Falling back on his old letter-writing campaign,Wilmet landed with the Cardinals and an invite to spring training as a non-roster minor league player.

After sleeping on the beach with his old Ford van for a week, Wilmet pitched well enough to get signed. He ended up staying with the Cardinals or the next three seasons, and into 1987. He got looks at AA Arkansas, but didn't see AAA, or the majors.

It finally took a stark assessment from team doctors about his drinking and drug abuse, as well as a change of teams, for Wilmet to finally clean up his act, and make his push to the bigs.

Go to Part 3: Paul Wilmet, Made It