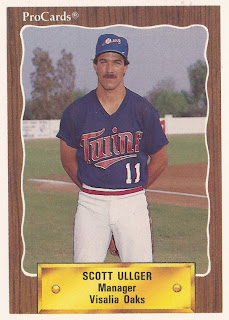 Scott Ullger began his third-straight big league camp in 1985. He was hoping to get back to the majors, a place he'd been only once, in 1983.

Late that spring, after being sent back to minor league camp, Ullger spoke with The Toledo Blade about the rigors, and expenses, in that minor league spring training.

"A lot of times you break even or lose money during spring training, but you know the chance is there," Ullger told The Blade. "Kirby Puckett was making $1,200 a month with the Mud Hens last season, but in less than six weeks he was in the big leagues and starting."

Ullger never did get to play again in the big leagues. But he has gotten back, as a coach. And he's been back each year since 1995, with his old parent club, the Twins, alternatively serving as a base coach or as hitting coach. And it's a job he continues into 2013, serving as the big league club's coach at first base.

Ullger's baseball career began in 1977, taken by the Twins in the 18th round of the draft, out of St. John's University.

Ullger started at single-A Wisconsin Rapids, them made AA Orlando in 1979 and AAA Toledo in 1982.

In 1983, Ullger is not recorded as playing in the minors at all. Instead, he debuted with Minnesota in April and played his last game in September. In all, though, he got into just 35 games, hitting .190.

That final game in September also turned out to be Ullger's final game in the majors. He played in AAA for four more seasons, his last with the Orioles at Rochester, ending his playing career.

But Ullger's baseball career continued. In 1988, he returned to the team that drafted him and brought him to the majors, taking the helm at single-A Visalia. He stayed on there as manager for three seasons.

At Visalia in 1990, he pegged a young Rich Garces as on his way to the bigs. Garces went on to a play decade in the majors.

"He's not afraid to work hard, and he's working on a split-finger to throw against lefties," Ullger told The Orlando Sentinel. "If he gets that down, then no one can touch him. He's a good athlete and good fielder. Don't forget that this kid is just 19 years old. He's just mature for his age."

Garces first made the majors that next month. It took Ullger a few more years, but soon he was back in the majors, too.

Ullger moved up to manage AA Orlando for 1991, then AAA Portland for 1992. It was in 1995 that Ullger moved back to the bigs, serving as third base coach in Minnesota.

Ullger served as third base coach for four seasons, then hitting coach for the next five. As a base coach, he guided runners around third to home, or stopped them. In one case in 1996, a mixed up command helped lead to a Twins loss. Ullger reported shouting "Go!," while the runner heard "No!," according to The Associated Press.

By December 2001, Ullger was talked about as a possible successor to longtime Twins manager Tom Kelly. Though the job went to another longtime coach Ron Gardenhire, Ullger stayed on under Gardenhire.

But, while continuing to coach for the team, Ullger has gotten looks at the manager's seat, when Gardenhire's been away.

In May 2012, as Gardenhire was away attending the college graduation of his daughter, Ullger tried to explain to The St. Paul Pioneer Press a 7-0 Twins loss.