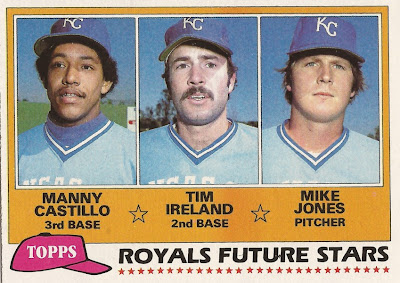 Tim Ireland's promotion to AA Quebec City in 1974 didn't come as a surprise to those who knew him in Florida, The Palm Beach Post wrote two years later.

"He's a player whose desire is going to carry him one step above what his ability will," West Palm Beach manager Gordie MacKenzie told The Palm Beach Post. "That might mean he'll make the major leagues some day."

Ireland did eventually make the majors, by way of another trip to the Florida State League and nine full seasons in the minors.

Ireland, though, has since gone on to a long post-playing career as a coach and as a manager in the minor leagues.

Ireland's playing career began in 1973, taken by the Expos in the 25th round of the draft out of Chabot College.

He played that first year at short-season Jamestown, hitting .286 in 69 games. He then moved to West Palm Beach for 1974 hitting .243, but getting that late-season promotion to Quebec. 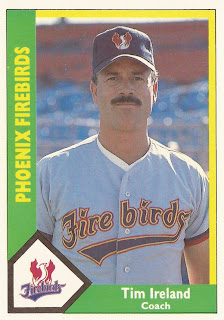 But Ireland was released by the Expos in April 1975, playing the rest of the year in the Orioles and Reds systems.

He returned to the Florida State League with the Orioles in 1975, then with the Cubs in 1976. It was in 1977 that Ireland arrived in the Royals system, the team that would eventually bring him to the majors.

Ireland spent spring 1981 with the big club. He also made Sports Illustrated. Ireland, a player with no major league time, got 10-year veteran Larry Biittner on the hidden ball trick.

"It's just a logical thought process," Ireland told SI afterward. "You play all your life and see guys off base. No big deal."

It was in September that Ireland finally debuted in the majors. He got into his first game Sept. 21, getting into four games total. He scored a run, got caught stealing, but didn't get an at bat.

In October, Ireland talked about the state of his career with The Nevada Daily Mail.

Ireland returned to the Royals in May 1982, getting into seven more games, his final seven games in the majors. This time, he made it to the plate. In seven at bats, he got one hit.

Ireland finished out the year back at Omaha. Ireland continued playing after that, but in Japan. For 1983 and 1984, Ireland was a member of the Hiroshima Carp. He finished out his playing career in 1985, back in the minors.

Soon after, Ireland started his post-playing career as a coach, manager and scout.