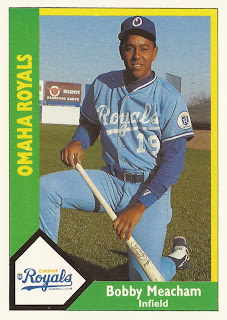 Bobby Meacham still wanted to be a Yankee in 1987. Even after serving, apparently at George Steinbrenner's whim.

Even after having a good spring, then being sent back to the minors as the spring closed, according to The New York Times.

''They always have to answer to the boss,'' Meacham told The Times. ''He's always a factor. I don't know who made the decision and I don't care to figure it out. I'm just shocked. I played well enough to make this team, and everybody here will tell you that.''

Meacham did continue to be a Yankee, playing 77 games in the Bronx that year. He also returned for his sixth season in 1988, playing 47 more games for the Yankees, ending his major league career.

Meacham's major league career began in 1983, playing 22 games for the Yankees that year, hitting .235. It was the next April when Meacham first caught Steinbrenner's ire.

The season just begun, Meacham booted a ball late. The error was a costly one, one that cause the Yankees the game. It also cost Meacham a spot in the majors. At Steinbrenner's direction, Meacham was sent back to the minors, to AA.

Meacham's teammates questioned the snap decision, especially on a player like Meacham, fresh from the minors.

"If Meacham could get back on defense today and do the job, it would take the pressure off and he could forget it," Yankees hitter Don Baylor told The Times later. "But now he has to go to Double A and it could be discouraging to a young player."

Brought up in Meacham's place was young infielder Keith Smith. Steinbrenner was quick to praise Smith's fielding, though Smith, too, had a short stint with the Yankees, two games.

Meacham's professional career began in 1981, not with the Yankees, but with the Cardinals. St. Louis selected him in the first-round that year. He played that year at single-A Gastonia.

He arrived in the Yankees' system in December 1982, part of a five-player deal. The Yankees moved him up to AAA Columbus that April, moving him up to the Bronx that June.

In 1984, Meacham's banishment to AA Nashville lasted eight games before moving to AAA Columbus. He returned to New York by mid-June. By August, Meacham was optimistic. He also hit his first major league home run. "Now I've got only 499 to go," Meacham told The Associated Press.

By 1985, Meacham seemed to have shaken off any notice from the boss. He stayed up with the Yankees for the entire year, getting into 156 games. But he also hit just .218.

He wouldn't come close to that year again. In 1986, Meacham played in 56 games. The September, The Los Angeles Times counted seven trips for Meacham between New York and the minors since 1983.

"I know things can change here quickly," Meacham told The LA Times. "If you're not going good, you're going to be replaced."

He returned in 1987 for another 77, after that demotion for the start of the year. His final game for the Yankees, and in the majors, came in July 1988.

Meacham continued in the minors for two more seasons. He played 1989 with the Pirates at AAA Buffalo, then 1990 with the Royals at AAA Omaha, ending his playing career.

Meacham soon after started his post-playing career in baseball, serving as manager in 1992 for short-season Eugene. By 2006, Meacham back in the majors, as the third base coach for the Marlins.

In 2010, he became the Astros' first base coach, a job he continues for 2011. This past off-season, Meacham worked with Astros third baseman Chris Johnson, an effort to improve Johnson's fielding.

"We know he can play there," Meacham told The Houston Chronicle in February of Johnson. "We talked a lot about how his arm strength is fine, his fielding is fine. What we want to do is develop his consistency."