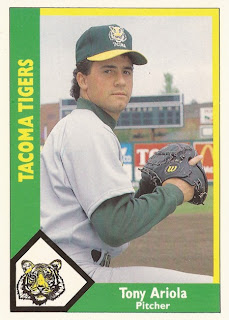 Playing in the Alaska Baseball League in 1987, Tony Ariola described himself to The Anchorage Daily News as a pitcher who hit the corners and let his defense get the outs.

To John Hughes, Ariola's opposing manager in one June game, Ariola was an unassuming pitcher who just beat him.

Ariola played in Alaska that summer, before his senior year at Northwestern. He went on to be drafted the next summer by the Athletics in the 26th round of the draft. But his time in the professional ranks would be brief, just four seasons. And it would end without him making the majors.

Ariola spent his first professional season at short-season Southern Oregon. There, he went 8-3, with a 2.63 ERA. One of those wins came in an August game, where he gave up three hits and no runs in seven innings against Bend. He also had a late-season 5-0 victory over Spokane. He gave up just two hits.

He returned for 1992 for just five more games. He started three at single-A Madison, then two more at AA Huntsville, going 3-0 with a 2.37 ERA between them. But they were Ariola's final games as a professional. His career ended without making the majors.

That year, Ariola's old high school coach spoke to The Chicago Tribune about the coach's more recent players. The coach compared that plaer to Ariola and another player.

Ariola was still fresh on Fenwick High School Coach Dave Hogan's mind. "Ariola," Hogan told The Tribune, "probably had the best fastball out of the group."