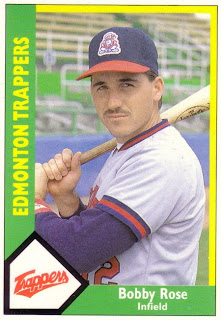 The bus carrying the California Angels left the New Jersey Turnpike in May 1992, crashing off the side. Players survived, The Los Angeles Times wrote a year later, but there were injuries.

Young Bobby Rose was among those injured. Rose suffered a sprained ankle. Just as suddenly as the accident, Rose's major league season was over. He continued playing, but by year's end, he was in Japan, according to The Times.

"I have to revive my career now," Rose told The Times in May 1993 from Japan, noting that he'd had trouble sleeping since the accident. "You know, I can't help but think that if it wasn't for that accident, I'd still be playing for the Angels. Maybe I'd be starting, who knows?"

Rose never did get back to the majors. But he did do the next best thing, putting together a long career in Japan, and, by one account becoming "one of the best foreign players ever to come to these shores."

He played until a contract dispute in 2001 prompted him to retire. He turned down spring training offers from major league clubs, he told reporters, but he declined their offers.

Rose's road to that night on the New Jersey Turnpike and to Japan, began in 1985, when he was taken by the Angels in the fifth round of the draft.

He played that season at short-season Salem, then the next at single-A Quad Cities, hitting .222 and .253 respectively.

Rose's career almost ended after that season, long before the Turnpike and far from the majors. Family problems, including a split from his wife, prompted him to quit baseball, The Times wrote in 1989. He didn't play a game in 1987, instead working at a graphics company, according to the article.

"It was definitely over for me," Rose told The Times. "My mind wasn't on baseball, and if you're mind's not on it, it's not worth doing."

But he returned for 1988, getting back together with his wife, The Times wrote. He played that year at single-A Palm Springs, the next at AA Midland. Not even two years after being out of baseball, by August 1988, Rose was in Anaheim.

He played 14 games with California that year. In his fourth, he hit a go-ahead home run. He got a standing ovation from the crowd, according to The Times.

Rose went on to spend brief stints with California each of the next three seasons; seven games in 1990; 22 in 1991. In 1992, he played in the most games of his four-year career, all played before that May accident.

His ankle healed, Rose moved to Japan. In 1995, he was credited with helping Yokohama to a victory over Yakult with a double. By 1998, Latham's Guide to Japanese Baseball was placing Rose among the best foreigners playing the game. He hit .328 with 18 home runs in 1997.

He was also credited with being calmer than the typical foreign player, with one announcer in an August 1997 noting that Rose could have argued a pitch, but didn't. "On and off the field, Rose is a model player. What more could Yokohama possibly want?," Latham's wrote.

Yokohama only offered a pay cut. Still, Rose didn't want to play for any other team, according to The Japan Times.

"I don't regret my decision and we had good talks. When I received the offer, I thought this may be a sign that I should get a new life started,"Rose told The Japan Times after his announcement.

But it was another point when Rose's career almost ended. It had almost ended, except for one more return in 2003. He signed with the Chiba Lotte Marines. But it was a brief return. Soon, he returned to the United States.

In the end, he was connected to Yokohama, not Chiba.