Check out the revisited John Fishel feature from October 2012, John Fishel, Anything Asked 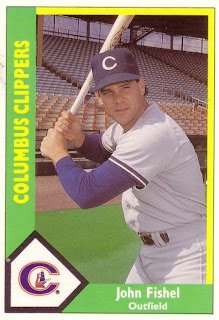 Talking to The Los Angeles Times in February 1995, John Fishel was frank about his situation.

Married with three children, Fishel had a son from a previous marriage and also fathered a daughter out of wedlock. He made $28,000, nearly half of that went to child support. He had also been out of baseball since 1991, working at a cabinet company.

"It was a no-brainer to come here," Fishel told The Times of his then job as a replacement player. "My boss gave me a leave of absence and wished me luck. It's an opportunity that doesn't come around too often, so I'm going to take advantage of it."

A little more thought, however, might have averted what happened a couple weeks after that interview.

On March 8, just after the National Antham was played, Fishel was led from the Angels' dugout and arrested, according to The Times. As it turned out, there was another woman out there, from the Phoenix area, who claimed Fishel fathered her 6-year-old daughter. The warrant had been active for him since 1991.

"If it is established that I'm the father, then I'll be more than happy to support her," Fishel told The Times in a March 9 story, after his release on bail. "I've been paying support for other kids, so the notion of me having lots of money (to pay the Phoenix-area woman) is completely ludicrous."

Fishel originally signed with the Astros after being taken in the ninth round in 1985. He made AA Columbus, Ga., in 1987, then AAA Tucson in 1988. It was that same year he got the call-up to Houston. The outfielder played 19 games for the Astros, getting six hits in 26 at bats.

Fishel was originally drafted by the Yankees in 1981, but he went to college. The Yankees finally got him in 1989, traded with two others for Rick Rhoden. But he never made New York, or the majors again.

He stayed in the Yankees system through 1990, playing at AAA Columbus. But an off season injury, a truck accident that resulted in 29 stitches, and meant he couldn't hold a bat. By 1992, he was with the cabinet company.

But it was his return to baseball during the strike in 1995 that Fishel is perhaps most remembered for. Columnist and baseball scholar George Will put that as the top piece of trivia from the strike.

Fishel just wanted to put it and the jail experience behind him, and get some sleep.