The likes of the 1990 Niagara Falls Rapids, including two presidents, George Bush - and Donald Trump

Rarely do baseball card backs offer much of anything, especially minor league cards.

But the 1990 Niagara Falls team set, from the manufacturer Pucko, included more. The card backs include information that appeared to be from some questionnaire, asking the players' likes in a variety of areas.

The topics were seemed designed to elicit answers to allow the kids getting the cards the ability to relate to the players.

The card backs include everything from the players' favorite major leaguer, to the person they'd most like to meet, to their favorite movie, TV show, musical artist and food.

One of the more interesting selections - especially considering the 30 years that have passed since the selection was made - was Kirk Mendenhall's selection for the person he'd most like to meet: Donald Trump.

If allowed for time, Mendenhall's selection is one of two presidents selected by players, both then-current and future. Mario Moccia selected President George Bush as the person he'd most like to meet.

Eleven player cards included their favorite movie. No movie was selected twice. "The Natural" (Brian Schubert); "Bull Durham" (Eric Leimeister); and "Field of Dreams" (Rogers) all made the cut. But "RoboCop" (Bob Undorf); "Lethal Weapon" (Radachowsky); "The Hunt for Red October" (Mendenhall) and "Rocky 4" (Tim Kirt) also made the list.

Six musical acts were also mentioned as favorites: Elton John (Coppeta), U2 (Radachowsky), Cool and the Gang (Kimbler) and American Christian metal band Stryper (Drell). Leimeister selected Billy Joel, while Marcero selected the band that perhaps might have the theme song of many minor leaguers, Journey and "Don't Stop Believin'."

Finally, two of the cards also included facts that might also be assumed of the other players on the team, though left unsaid on the other cards. Both Gino Tagliaferri and Denny McNamara wanted to be major leaguers. 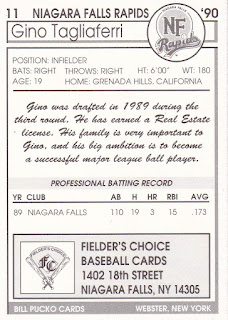