Bob Undorf moved on to the pros without pressure; Played four seasons, made AA

Bob Undorf's 15 saves led the nation with South Florida in he also turned in a 1.36 ERA, but he got overlooked for NCAA All-American teams, The Tampa Bay Times wrote.

Undorf didn't understand the snub, he told The Times in June 1990, but, as a recent Tigers signee, all he could do was look forward.

"I'll just go in and see how I do," Undorf told The Times. "I don't have any pressure."

Undorf started his pro career shortly afterward. He did well enough to make AA in four seasons, but he couldn't make it higher.

Undorf's pro career began that year in 1990, taken by the Tigers in the 33rd round of the draft out of South Florida.

Undorf started with the Tigers at short-season Niagara Falls. He went 4-1 over 22 relief outings, with a 3.35 ERA. He also saved four.

He played 1991 at single-A Fayetteville and back at Niagara Falls. He went 6-2 on the season and saved seven. He ended with a 1.63 ERA between the two.

Undorf arrived at high-A Lakeland for 1992. He picked up his second save of the year in a late-May contest. He saved 11 overall, with a 2.28 ERA.

"If he can improve his control, his change-up and his breaking ball, he's got some kind of chance to pitch in the major leagues," Lipon told The Times. 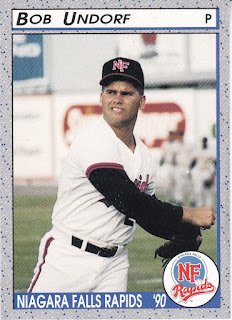