Francisco Alcantara proved a work horse for independent Reno in 1991.

By mid-May, the reliever Alcantara had seen action in 20 of the team's first 36 games, to lead all the minor leagues in appearances, according to The Reno Gazette-Journal.

Alcantara went on to see time in 64 games that year. His time as a pro, however, proved limited. That season at Reno marked his second pro season and also his last.

Alcantara's career began in 1990, signed by the Tigers as a free agent out of his native Dominican Republic.

Alcantara started with the Tigers at short-season Niagara Falls. He got into 24 games, saved 10 and ended with a 1.70 ERA. He also saw high-A Lakeland for two outings. In two innings there, he gave up one hit and no runs.

At Niagara Falls, his card back identified Alcantara's favorite major leaguer as Pascual Perez, his favorite TV show as "The Arsinio Hall Show" and chicken and rice as foods he liked. 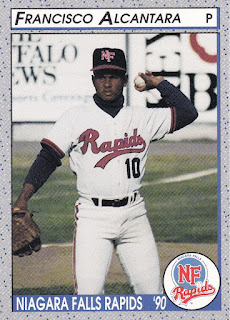