St. Charles Post player Tim Kirt hit a bit of a slump heading into the all-star game in July 1985, enough of a slump that his coach benched him for a game, The St. Louis Post-Dispatch wrote.

"I don't want to go into details about it," Kirt's manager Don Snider told The Post-Dispatch. "But it gave him time to reflect. I think he's better for it."

Kirt soon came out of the slump, then racked up three its in the all-star game, The Dispatch wrote.

Kirt went on from there to college and to the pros. His pro career lasted a single season, spent entirely at short-season Niagara Falls.

Kirt's pro career began and ended in 1990, taken by the Tigers in the 41st round of the draft out of Missouri Baptist University. He was also credited by his formal name, Timothy Kirt.

That same summer in 1985, Kirt put together an early .520 batting average, The Post-Dispatch wrote.

"He makes them throw strikes," Snider told The Post-Dispatch after a Kirt 3 for 4 performance. "He goes for the good pitches. He doesn't swing at bad pitches. He also keeps his hands back on the curve."

Kirt then went on to Missouri Baptist and kept hitting enough to get noticed by the Tigers and land in Niagara Falls.

Kirt got into 63 games for short-season Niagara Falls. He hit .213, with one home run and knocked in 12 in what turned out to be his only season as a pro. 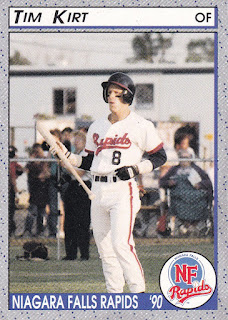