Art Thigpen's had a long career in baseball. He played in college. He then played in the pros.

He then returned to the game years later, but on a different path. He became an umpire, CNN wrote in 2011.

"Since I started in baseball when I was very young, I've been involved in just about every aspect of the game," Thigpen told CNN for a feature on minor league umpires. "When I'm done with this, I'm probably done. This is the last picture for me."

By that point, Thigpen was in his ninth season as a minor league umpire and umpiring at AAA. In his playing career, Thigpen didn't get as far. He played three seasons and topped out at short-season.

Thigpen's career began in 1988, taken by the White Sox in the 26th round of the draft out of Flagler College in Florida. Thigpen was also credited by his formal name, Arthur Thigpen.

He started with the White Sox in the rookie Gulf Coast League. He went 2-3 over 16 relief appearances, with a 6.63 ERA.

For 1990, he signed with the Tigers and played at short-season Niagara Falls. He got into eight games, started one, and went 1-1, with a 7.36 ERA to end his playing career.

Thigpen then started work as an umpire by 2003. He umpired in the Gulf Coast League, NY-Penn League, Southern League and he spent his first year at AAA in 2009.

He also umpired in spring training.  In 2011, he umpired Roy Halladay's final spring start. Thigpen called two pitches balls that Halladay thought were strikes, according to the book "The Rotation: A Season with the Phillies and the Greatest Pitching Staff."

"Halladay's blue eyes turned to daggers as he stared in at Thigpen," the authors wrote.

In 2013, Thigpen was umpiring in the independent Central Baseball League. That August, he called a pivotal play a no-catch, a call that set up the winning runs in the Amarillo loss, according to Amarillo Globe-News.

"They got it right," Amarillo manager Bobby Brown told The Globe-News. “I didn’t see the ball come out. But (first base umpire) Art (Thigpen) said you have to go by the player’s reaction. He was definitely safe. I didn't see the ball come out and I later asked Trey and he said it came out.″ 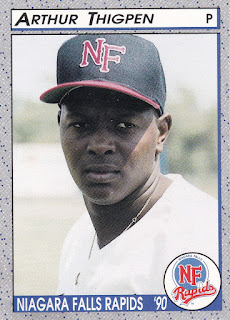