He'd ended his college career days earlier by giving up 11 runs over two starts, enough for Leimeister to wonder whether a pro baseball career would ever happen for him, the director, Frank Racaniello told The Daily News then.

"He said: 'It looks like this is what I'll be doing for a living now,'" Racaniello recalled to The Daily News.

Leimeister did go on to a pro career, just a short one. He played two seasons and topped out at high-A.

Leimeister's career began that year in 1990, taken by the Tigers in the 40th round of the draft out of St. John's.

In summer 1988, he played collegiate ball with Nassau and won MVP of the championship series by saving two.

At St. John's, Leimeister served as team captain in 1990. He also saved 17 over his career, still good for fourth all-time at the school.

He then moved to high-A Lakeland for 1991. He went two innings and gave up one hit in a May win and one earned in a third of an inning in another. He went 2-2 over 35 relief outings, with a 5.55 ERA to end his career. 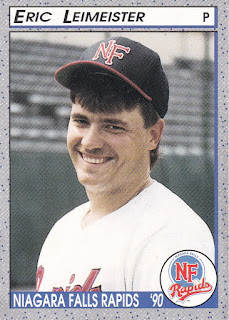