Eddy Rodriguez finished strong for the Bristol Tigers in this August 1990 game, but it wasn't enough, according to The Bluefield Daily Telegraph.

Rodriguez came on in relief, his team down 1-0. He held Bluefield without a run, but the score remained that at the end, 1-0, The Daily Telegraph wrote.

Rodriguez had that outing in his second season as a pro. He went on to play in two more campaigns. He topped out at high-A.

Rodriguez' career began in 1989, having been signed by the Tigers as a free agent out of his native Dominican Republic. Rodriguez was also credited as Ed Rodriguez.

Rodriguez started with the Tigers at rookie Bristol. He got into 24 games in relief, picked up a win, two losses and two saves. He ended with a 3.07 ERA.

Rodriguez then played 1990 between Bristol, short-season Niagara Falls and single-A Fayetteville. He got into 23 games on the year, started three. He had a 1-4 record on the year and a 4.08 ERA.

His card back at Niagara Falls identified his favorite major leaguer as Nolan Ryan. He also liked the Arsenio Hall Show. 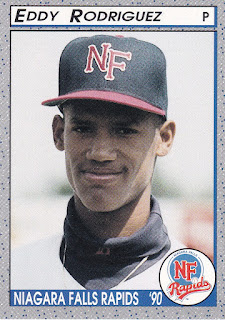