Warren Sawkiw spent nearly a decade in the minors, but never made the bigs. Years after his playing career ended, he finally made it up, as a radio announcer for the Blue Jays, The Toronto Sun wrote.

He made it there after a relatively short period as an announcer, The Sun wrote, but Sawkiw knew he deserved to be there.

"I spent many a day riding the buses in the minor leagues, making $15 in meal money," Sawkiw told The Sun, cheerfully. "If people want to say I haven't paid my dues, just look at the stops on the record."

Sawkiw's playing career spanned nine seasons. He made AAA briefly in one of those, but not the bigs. His stint with the Blue Jays on radio lasted two seasons.

Sawkiw's career began in 1990, taken by the Tigers in the 20th round out of Wake Forest. He is a native of Toronto.

Prior to turning pro, Sawkiw, a native of Canada, also played for his home country in the 1988 Olympics in Seoul.

Sawkiw started with the Tigers at short-season Niagara Falls and at single-A Fayetteville. He hit .270 over 66 games between them as a second baseman and an outfielder.

He returned to affiliated ball for 55 games in 1995, getting 11 at AAA Syracuse. He then played 20 games at AA Birmingham with the White Sox in 1996 and four final affiliated games there in 1997.

After his two-year stint with the Blue Jays as radio announcer, Sawkiw returned to the Olympics in 2008 as a color commentator for CBC Sports. He also served as a baseball analyst at the 2004 games and played a role in 2000 as a bid representative. 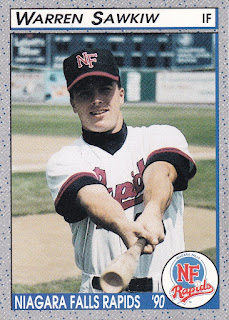