Kevin Keon came on in relief in this April 1989 game for Le Moyne College and took the win, The Syracuse Post-Standard wrote.

He did so by giving up one hit over four innings, The Post-Standard wrote.

Keon went on later that year to turn pro. His pro career lasted two seasons. He topped out at high-A.

Keon's career began in 1989, taken by the Rangers in the 18th round of the draft out of the Syracuse-area school.

Keon played with the Rangers in the rookie Gulf Coast League and at high-A Port Charlotte. He went 1-2 at Port Charlotte, but gave up 25 earned runs in 23.2 innings of work for a 9.51 ERA.

Keon moved to the Tigers system for 1990 and played the year at short-season Niagara Falls. He gave up a walk, single and a sacrifice fly in an August relief outing. Overall, he went 4-3 over 21 outings, two starts, with a 6.47 ERA. That season proved his last as a pro. 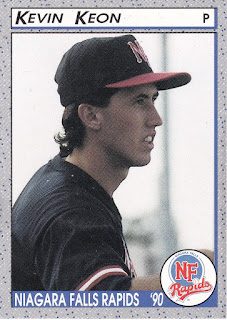