Kelley O'Neal signed as pro out of high school, performed over six seasons, made AA

Kelley O'Neal worked to learn a new position at short-season Niagara Falls in 1990 and he looked to continue to hit, The Detroit Free Press wrote.

Drafted out of high school, he also found himself wishing at times that he'd gone to college, he told The Free Press.

"When you come right out of college you're already 22, 23, and you either perform in two years or they get rid of you," O'Neal told The Free Press. "It's different coming out of high school. First, they say to take your time, Kelley O'Neal you're still young. But all of a sudden, you're not young anymore."

That point eventually did come for O'Neal and it came without him reaching the majors. O'Neal played six seasons as a pro, his lasts at age 23. He topped out at AA.

O'Neal's career started in 1989, taken by the Tigers in the ninth round of the draft out of Belleville High School in Michigan.

O'Neal started with the Tigers at rookie Bristol. He hit .231 over 60 games. He played at third, short and in the outfield,

He continued largely playing at second through the reminder of his career. He played 1992 and 1993 at high-A Lakeland. He hit .256 his first year there and .275 there his second.

O'Neal made AA Trenton for 43 games in 1994. He hit an RBI single in a April game, a hit that snapped an 0 for 23 streak to start the year, according to Central New Jersey Home News.

"It feels real good," O'Neal told The Home News afterward. "During spring training I got into some bad habits. When we came up north I was able to work them out in Wilmington, and hopefully I'm ready to go for the rest of the season." 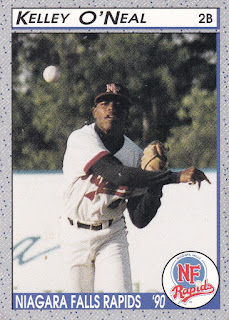