Radachowsky then excelled, according to The Heights.

"For us to win, we needed Gregg Radachowsky to catch," Boston College coach Moe Maloney told The Heights in April 1990, "his catching has become so good that he has made himself into a pro prospect."

Radachowsky did go on to the pros and he did so as a catcher. His pro career, however, turned out to be brief. He saw time in two pro seasons and topped out at high-A.

Radachowsky's career began that year in 1990, taken by the Tigers in the 25th round of the draft out of Boston College.

Radachowsky went to Boston College after spending his high school time in Danbury, Conn., at Danbury High. He played both football and baseball there. He hit .440 there his senior year as a catcher. He made the school's Hall of Fame in 2018.

With the Tigers, Radachowsky started at short-season Niagara Falls. He got into 45 games and hit .192, with three home runs.

He returned for 1991 and saw time at three levels, but he only played in eight games. He saw one at high-A Lakeland, five at single-A Fayetteville and two back at Niagara Falls. He went 2 for 17 in his final season as a pro.

Radachowsky then returned home to Connecticut. In 2002, he became a firefighter for Stamford. 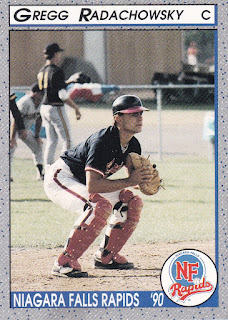