His alma mater Kent State in the College World Series in 2012, Brian Schubert looked back on his  own time at the school in The Fremont News-Messenger.

"The talent level was improving every year that I was there," Schubert told The News-Messenger. "My team was just on the verge in 1990 during my senior year. I think we lost the MAC championship on the last day on our field. But after that, they took off."

Schubert's time at the school turned into time as a pro. His pro career, however, never took off. He played a single year, spent at short-season Niagara Falls.

Schubert's career began and ended that year in 1990, taken by the Tigers in the 32nd round of the draft out of Kent State.

Schubert went to Kent State out of Bellevue High School in Ohio, where he also played golf and basketball. He helped his team to the 1985 state title as he pitched on consecutive days. He made the school's Hall of Fame in 2004.

At Kent State, Schubert led the club in earned run average in 1990 at 2.55. He also won nine contests and struck out 53, also team leaders. He won 22 total over his career there, tied for eighth best all time.

His first collegiate start ended in a seven-inning no-hitter, according to the Kent State record book. He was the third collegiate player anywhere to throw a no-hitter in his first outing.

After signing with the Tigers for 1990, Schubert played the season at Niagara Falls. He got six starts. He went 3-1, with a 3.48 ERA to mark the extent of his career.

By 1994, Schubert was back at Bellevue, as head baseball coach. By 2004, he'd made assistant principal. In 2020, he serves as high school athletic director. 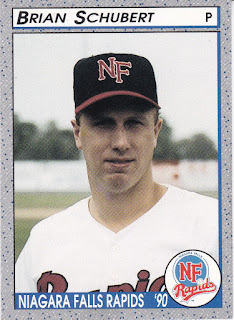